»All about this Armenia Signature Drone Video by One Man Wolf Pack
4K UltraHD aerial footage of my drone flights in Yerevan (Capital of Armenia); project finished & uploaded on 2020-12-18 by One Man Wolf Pack UltraHD Drone Footage. #drone #aerial #dronefilm

» Media data: This drone video (Internal ID 890, taken in between 2016 & 2021 and published in 2021) is an extraction of my Armenia 4K Drone Video Footage & Armenia Drone Pictures. Copyright protected Footage and Photos on Sale. For inquiries, please contact me via E-Mail or my Blog.

About Armenia: Yerevan (sometimes spelled Erevan) is the capital and largest city of Armenia and one of the worlds oldest continuously inhabited cities. Situated along the Hrazdan River, Yerevan is the administrative, cultural, and industrial center of the country. It has been the capital since 1918, the fourteenth in the history of Armenia and the seventh located in or around the Ararat plain. The city also serves as the seat of the Araratian Pontifical Diocese; the largest diocese of the Armenian Apostolic Church and one of the oldest dioceses in the world. The history of Yerevan dates back to the 8th century BC, with the founding of the fortress of Erebuni in 782 BC by King Argishti I at the western extreme of the Ararat plain. Erebuni was designed as a great administrative and religious centre, a fully royal capital. By the late ancient Armenian Kingdom, new capital cities were established and Yerevan declined in importance. Under Iranian and Russian rule, it was the center of the Erivan Khanate from 1736 to 1828 and the Erivan Governorate from 1850 to 1917, respectively. After World War I, Yerevan became the capital of the First Republic of Armenia as thousands of survivors of the Armenian Genocide in the Ottoman Empire arrived in the area. The city expanded rapidly during the 20th century as Armenia became part of the Soviet Union. In a few decades, Yerevan was transformed from a provincial town within the Russian Empire to Armenias principal cultural, artistic, and industrial center, as well as becoming the seat of national government. 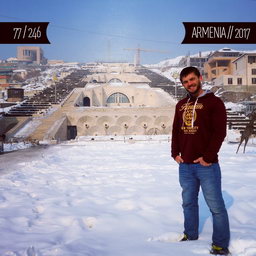