»All about this Finland Signature Drone Video by One Man Wolf Pack
4K UltraHD aerial footage of my drone flights in the Port Area of Helsinki (Capital of Finland); project finished & uploaded on 2020-12-18 by One Man Wolf Pack UltraHD Drone Footage. #drone #aerial #dronefilm

» Media data: This drone video (Internal ID 859, taken in between 2016 & 2021 and published in 2021) is an extraction of my Finland 4K Drone Video Footage & Finland Drone Pictures. Copyright protected Footage and Photos on Sale. For inquiries, please contact me via E-Mail or my Blog.

About Finland: Helsinki is the capital, primate and most populous city of Finland. Located on the shore of the Gulf of Finland, it is the seat of the region of Uusimaa in southern Finland, and has a population of 656,229. The citys urban area has a population of 1,268,296, making it by far the most populous urban area in Finland as well as the countrys most important center for politics, education, finance, culture, and research; while Tampere in the Pirkanmaa region, located 179 kilometres (111 mi) to the north from Helsinki, is the second largest urban area in Finland. Helsinki is located 80 kilometres (50 mi) north of Tallinn, Estonia, 400 km (250 mi) east of Stockholm, Sweden, and 300 km (190 mi) west of Saint Petersburg, Russia. It has close historical ties with these three cities. // Finland, officially the Republic of Finland (Finnish: Suomen tasavalta, Swedish: Republiken Finland (listen to all)), is a Nordic country located in Northern Europe. Finland shares land borders with Sweden to the west, Russia to the east, and Norway to the north and is defined by the Gulf of Bothnia to the west and the Gulf of Finland to the south that are part of the Baltic Sea. 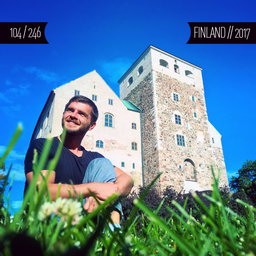