» Media data: This drone video (Internal ID 864, taken in between 2016 & 2021 and published in 2021) is an extraction of my Germany 4K Drone Video Footage & Germany Drone Pictures. Copyright protected Footage and Photos on Sale. For inquiries, please contact me via E-Mail or my Blog.

About Germany: Germany, officially the Federal Republic of Germany (German: Bundesrepublik Deutschland), is a country in Central and Western Europe. Covering an area of 357,022 square kilometres (137,847 sq mi), it lies between the Baltic and North seas to the north, and the Alps to the south. It borders Denmark to the north, Poland and the Czech Republic to the east, Austria and Switzerland to the south, and France, Luxembourg, Belgium and the Netherlands to the west. Various Germanic tribes have inhabited the northern parts of modern Germany since classical antiquity. A region named Germania was documented before AD 100. Beginning in the 10th century, German territories formed a central part of the Holy Roman Empire. During the 16th century, northern German regions became the centre of the Protestant Reformation. Following the Napoleonic Wars and the dissolution of the Holy Roman Empire in 1806, the German Confederation was formed in 1815. In 1871, Germany became a nation state when most of the German states unified into the Prussian-dominated German Empire. After World War I and the German Revolution of 1918–1919, the Empire was replaced by the semi-presidential Weimar Republic. The Nazi seizure of power in 1933 led to the establishment of a dictatorship, World War II, and the Holocaust. After the end of World War II in Europe and a period of Allied occupation, two new German states were founded: the Federal Republic of Germany, generally known as West Germany, and the German Democratic Republic, East Germany. The Federal Republic of Germany was a founding member of the European Economic Community and the European Union, while the German Democratic Republic was a communist Eastern Bloc state and member of the Warsaw Pact. After the fall of communism, German reunification saw the former East German states join the Federal Republic of Germany on 3 October 1990. 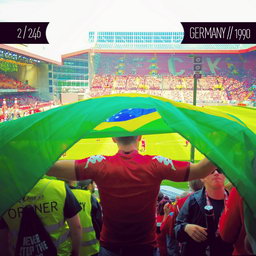