»All about this Malta Signature Drone Video by One Man Wolf Pack
4K UltraHD aerial footage of my drone flights in Malta (various places around this beautiful island in the Mediterranean Sea); project finished & uploaded on 2020-12-18 by One Man Wolf Pack UltraHD Drone Footage. #drone #aerial #dronefilm

» Media data: This drone video (Internal ID 878, taken in between 2016 & 2021 and published in 2021) is an extraction of my Malta 4K Drone Video Footage & Malta Drone Pictures. Copyright protected Footage and Photos on Sale. For inquiries, please contact me via E-Mail or my Blog.

About Malta: Malta, officially known as the Republic of Malta (Maltese: Repubblika ta Malta) and formerly Melita, is a Southern European island country consisting of an archipelago in the Mediterranean Sea. It lies 80 km (50 mi) south of Italy, 284 km (176 mi) east of Tunisia, and 333 km (207 mi) north of Libya. With a population of about 515,000 over an area of 316 km2 (122 sq mi), Malta is the worlds tenth smallest country in area and fourth most densely populated sovereign country. Its capital is Valletta, which is the smallest national capital in the European Union by area at 0.8 km2 (0.31 sq mi). The official and national language is Maltese, which is descended from Sicilian Arabic that developed during the Emirate of Sicily, while English serves as the second official language. Italian and Sicilian also previously served as official and cultural languages on the island for centuries, with Italian being an official language in Malta until 1934 and a majority of the current Maltese population being at least conversational in the Italian language. Malta has been inhabited since approximately 5900 BC. Its location in the centre of the Mediterranean has historically given it great strategic importance as a naval base, with a succession of powers having contested and ruled the islands, including the Phoenicians and Carthaginians, Romans, Greeks, Arabs, Normans, Aragonese, Knights of St. John, French, and British. Most of these foreign influences have left som 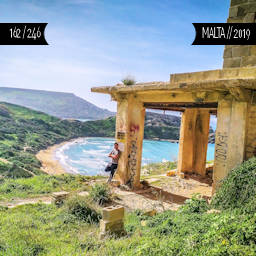