Here, you will find my best pictures from Boti, Ghana (Africa).
Below, you may also see some exquisite Boti Drone Videos and Drone Pictures by One Man Wolf Pack, as well as regular Videos from Boti!

No Drone Photos of Boti available


Drone videos and more by the One Man Wolf Pack! Blogger and Digital Nomad Miroslaw Wawak travels all 246 countries of the world and shares his experiences, pictures & videos. Join the madness, join the Drone Around The World!
4K UltraHD World Trip travel footage of the Boti Falls (Twin Waterfall), the Umbrella Rock (a huge rock large enough to cover 12 to 15 people) and the Akaa Falls, in Manya Krobo/Koforidua (Ghana; West Africa); project finished & uploaded on 2020-05-26 by One Man Wolf Pack UltraHD Drone Footage. #travel #ghana #botifalls

About Boti: Boti falls is a twin waterfall located at Boti in Manya Krobo in the Eastern Region of Ghana. These twin falls are referred to as female and male. It is located 17km North-east of Koforidua, which is the eastern regional capital. It is just over 30 minutes drive from Koforidua and over 90 minutes from Accra depending on the means of transportation. // The Umbrella Rock is a rock found at the site of the Boti Falls in Yilo Krobo District, Ghana. As the name implies, the overhang on the top is large enough to cover 12 to 15 people at once. Even though the pivot on which the top rock lies on might seem small, its very strong. Yearly, many Tourists travel to Boti Falls for its natural beauty, and the umbrella rock is visible through much of the trek to the falls. Also it is one of the windows backgrounds, so many people see it. // A predominant natural feature in Koforidua is the Obuo Tabri Mountain , which is considered sacred. There are waterfalls in the area such as Akaa Falls and Boti Falls. Umbrella Rock. 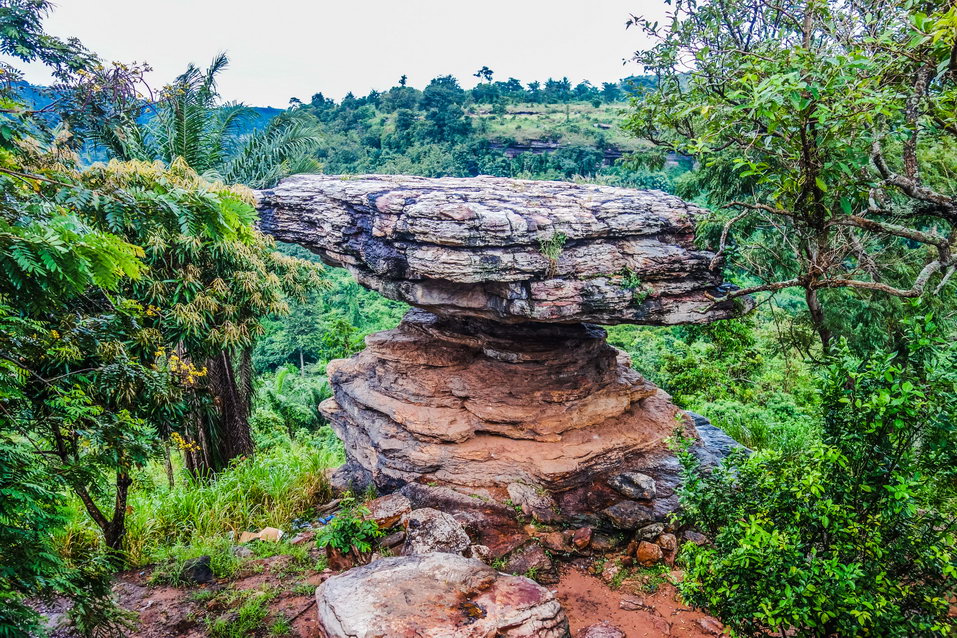