Saint Martin Drone Flight: Saint Martin is part of the Leeward Islands in the Caribbean Sea. It comprises 2 separate countries, divided between its northern French side, called Saint-Martin, and its southern Dutch side, Sint Maarten. The island is home to busy resort beaches and secluded coves. Its also known for fusion cuisine, vibrant nightlife and duty-free shops selling jewelry and liquor. On the Dutch side, incoming jets pass above Maho Beach, making it famous for photo-ops, and resorts cluster around nearby Simpson Bay. Front Street, the main shopping drag of the Dutch capital (Philipsburg), sees day-trippers from cruise ships, and the open-air restaurants and bars on the Dutch side offer a lively party scene. On the French side, the capital, Marigot, has a colorful market. Orient Bay offers shallow-water snorkeling, and tiny, offshore Îlet de Pinel has a tropical beach vibe. Grand Case is distinguished by its beachfront French and Creole restaurants. // Marigot is the main town and capital in the French Collectivity of Saint Martin. 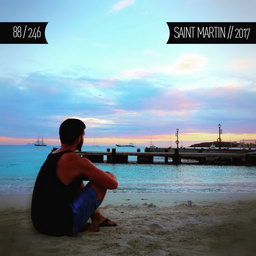