» Media data: This drone video (Internal ID 1168, shots taken in February 2022 and video published in 2022) is an extraction of our self-captured Buenos Aires 4K Drone Video Footage & Buenos Aires Drone Pictures. Copyright protected Footage and Photos on Sale. For inquiries, please contact us via E-Mail or our Blog.

About Buenos Aires: Buenos Aires is Argentinas big, cosmopolitan capital city. Its center is the Plaza de Mayo, lined with stately 19th-century buildings including Casa Rosada, the iconic, balconied presidential palace. Other major attractions include Teatro Colón, a grand 1908 opera house with nearly 2,500 seats, and the modern MALBA museum, displaying Latin American art. // Buenos Aires, officially the Autonomous City of Buenos Aires (Spanish: Ciudad Autónoma de Buenos Aires), is the capital and largest city of Argentina. The city is located on the western shore of the Río de la Plata, on South Americas southeastern coast. Buenos Aires can be translated as fair winds or good airs, but the former was the meaning intended by the founders in the 16th century, by the use of the original name Real de Nuestra Señora Santa María del Buen Ayre, named after the Madonna of Bonaria in Sardinia, Italy. The city of Buenos Aires is neither part of Buenos Aires Province nor the Provinces capital; rather, it is an autonomous district. In 1880, after decades of political infighting, Buenos Aires was federalized and removed from Buenos Aires Province. The city limits were enlarged to include the towns of Belgrano and Flores; both are now neighborhoods of the city. The 1994 constitutional amendment granted the city autonomy, hence its formal name of Autonomous City of Buenos Aires. Its citizens first elected a Chief of Government in 1996; previously, the Mayor was directly appointed by the President of Argentina. // Puerto Madero; the Obelisk on July 9 Avenue; the Caminito in La Boca; façade of the Metropolitan Cathedral; front view of Teatro Colón; Palace of the Argentine National Congress; Casa Rosada. 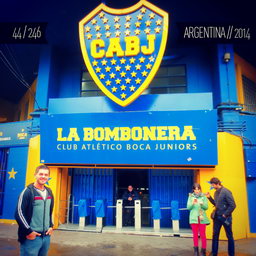