» Media data: This drone video (Internal ID 1169, shots taken in February 2022 and video published in 2022) is an extraction of our self-captured Montevideo 4K Drone Video Footage & Montevideo Drone Pictures. Copyright protected Footage and Photos on Sale. For inquiries, please contact us via E-Mail or our Blog.

About Montevideo: Montevideo, Uruguays capital, is a major city along Montevideo Bay. It revolves around the Plaza de la Independencia, once home to a Spanish citadel. This plaza leads to Ciudad Vieja (the old town), with art deco buildings, colonial homes and landmarks including the towering Palacio Salvo and neoclassical performance hall Solís Theatre. Mercado del Puerto is an old port market filled with many steakhouses. // Montevideo is the capital and largest city of Uruguay. According to the 2011 census, the city proper has a population of 1,319,108 (about one-third of the countrys total population) in an area of 201 square kilometers (78 sq mi). Montevideo is situated on the southern coast of the country, on the northeastern bank of the Río de la Plata. The city was established in 1724 by a Spanish soldier, Bruno Mauricio de Zabala, as a strategic move amidst the Spanish-Portuguese dispute over the platine region. It was also under brief British rule in 1807, but eventually the city was retaken by Spanish criollos. Montevideo is the seat of the administrative headquarters of Mercosur and ALADI, Latin Americas leading trade blocs, a position that entailed comparisons to the role of Brussels in Europe. The 2019 Mercers report on quality of life, rated Montevideo first in Latin America, a rank the city has consistently held since 2005. As of 2010, Montevideo was the 19th largest city economy in the continent and 9th highest income earner among major cities. In 2022, it has a projected GDP of $53.9 billion, with a per capita of $30,148. // Legislative Palace of Uruguay, Solis Theater, Obelisk of Montevideo, Mercado Agricola de Montevideo, Montevideo Telecomunication Tower, Palacio Salvo, Montevideo Carmelitas Church, La Carreta Monument, View of Fortaleza del Cerro, from Montevideo Port 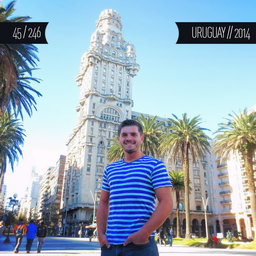