» Media data: This drone video (Internal ID 867, taken in between 2016 & 2021 and published in 2021) is an extraction of my Latvia 4K Drone Video Footage & Latvia Drone Pictures. Copyright protected Footage and Photos on Sale. For inquiries, please contact me via E-Mail or my Blog.

About Latvia: Latvia, officially known as the Republic of Latvia (Latvian: Latvijas Republika), is a country in the Baltic region of Northern Europe. Since Latvias independence in 1918, it has been referred to as one of the Baltic states. It is bordered by Estonia to the north, Lithuania to the south, Russia to the east, Belarus to the southeast, and shares a maritime border with Sweden to the west. Latvia has 1,957,200 inhabitants and a territory of 64,589 km2 (24,938 sq mi). Its capital and largest city is Riga; other notable major cities in Latvia are Daugavpils, Liepāja, Jelgava and Jūrmala. The country has a temperate seasonal climate. The Baltic Sea moderates the climate, although the country has four distinct seasons and snowy winters. After centuries of Swedish, Polish-Lithuanian and Russian rule, a rule mainly executed by the Baltic German aristocracy, the Republic of Latvia was established on 18 November 1918 when it broke away from the Russian Empire and declared independence in the aftermath of World War I. However, by the 1930s the country became increasingly autocratic after the coup in 1934 establishing an authoritarian regime under Kārlis Ulmanis. The countrys de facto independence was interrupted at the outset of World War II, beginning with Latvias forcible incorporation into the Soviet Union, followed by the invasion and occupation by Nazi Germany in 1941, and the re-occupation by the Soviets in 1944 (Courland Pocket in 1945) to form the Latvian SSR for the next 45 years. 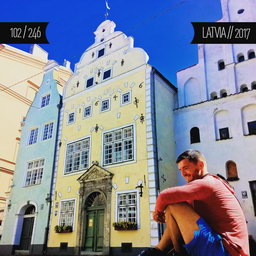