» Media data: This drone video (Internal ID 888, taken in between 2016 & 2021 and published in 2021) is an extraction of my Aland 4K Drone Video Footage & Aland Drone Pictures. Copyright protected Footage and Photos on Sale. For inquiries, please contact me via E-Mail or my Blog.

About Aland: Åland (/ˈɔːlənd, ˈɑːlənd/, also US: /ˈoʊlənd, ˈoʊlɑːn(d), ˈɑːlɑːnd/, Swedish: ˈǒːland, Finland Swedish: ˈoːlɑnd; Finnish: Ahvenanmaa ˈɑhʋenɑnˈmɑː) is an archipelago at the entrance to the Gulf of Bothnia in the Baltic Sea belonging to Finland. It is an autonomous and demilitarised region of Finland since 1920 by a decision of the League of Nations, and is Finlands only monolingually Swedish-speaking region. It is the smallest region of Finland, constituting 0.51% of its land area and 0.54% of its population. Mariehamn is the capital city of Åland. Åland comprises Fasta Åland on which 90% of the population resides and a further 6,500 skerries and islands to its east. Of Ålands thousands of islands, 60 are inhabited. Fasta Åland is separated from the coast of Sweden by 38 kilometres (24 mi) of open water to the west. In the east, the Åland archipelago is contiguous with the Finnish Archipelago Sea. Ålands only land border is located on the uninhabited skerry of Märket, which it shares with Sweden. From Mariehamn, there is a distance of about 160 kilometers to Turku, a coastal city of mainland Finland, and also to Stockholm, the capital of Sweden. Ålands autonomous status means that those provincial powers normally exercised by representatives of the central Finnish government are largely exercised by its own government. The current demilitarized, neutral position of Åland dates back to the days of the Paris Peace Treaty after the Åland War in the 1850s. 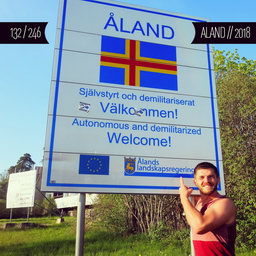