Media data: This drone video (4:51min playtime) is an extraction of my multipleGB Georgia 4K Drone Video Footage & Georgia Drone Pictures. Footage and Photos on Sale. For inquiries, contact me via E-Mail, my Blog, Facebook or Instagram Page.

Georgia Drone Flight: Georgia, a country at the intersection of Europe and Asia, is a former Soviet republic thats home to Caucasus Mountain villages and Black Sea beaches. Its famous for Vardzia, a sprawling cave monastery dating to the 12th century, and the ancient wine-growing region Kakheti. The capital, Tbilisi, is known for the diverse architecture and mazelike, cobblestone streets of its old town. Looming above Tbilisi is Narikala Castle, a reconstructed fortress founded in the 4th century and used during later Turkish and Persian occupations. The 11th-century Svetitskhoveli Cathedral is one of many notable Georgian Orthodox churches centered on the nearby town of Mtskheta. In the foothills of 5,033m-high Mount Kazbek lies the iconic, 14th-century Gergeti Trinity Church. Gergeti Glacier is a popular trekking destination farther up the mountains slopes. Along the Black Sea coast, the resort town Batumi has a seaside promenade and vibrant nightlife. 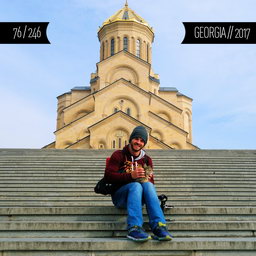