»All about this Greece Signature Drone Video by One Man Wolf Pack
4K UltraHD aerial footage of my drone flights in Athens (Capital of Greece), featuring the Akropolis, a variety of beautiful churches, parts of the amazing neighboring city Piräus, Olympic Stadiums and much more; project finished & uploaded on 2021-09-27 by One Man Wolf Pack UltraHD Drone Footage. #drone #athens #greece

» Media data: This drone video (Internal ID 1074, shots taken in 2018 and video published in 2021) is an extraction of our self-captured Athens 4K Drone Video Footage & Athens Drone Pictures. Copyright protected Footage and Photos on Sale. For inquiries, please contact us via E-Mail or our Blog.

About Athens: Athens is the capital of Greece. It was also at the heart of Ancient Greece, a powerful civilization and empire. The city is still dominated by 5th-century BC landmarks, including the Acropolis, a hilltop citadel topped with ancient buildings like the colonnaded Parthenon temple. The Acropolis Museum, along with the National Archaeological Museum, preserves sculptures, vases, jewelry and more from Ancient Greece. Athens is also a contemporary city, and its not uncommon for the nightlife hubs of Kolonaki, Psiri and Gazi to stay busy until dawn. Some areas of the city are pedestrian-only, such as the winding lanes of the Plaka neighborhood, lined with cafes, traditional tavernas and neoclassical houses. Near Syntagma Square, whose Old Royal Palace houses Greeces parliament, is the Ermou shopping boulevard. Here, fashion boutiques mix with stores selling silver and handmade art. The Grand Promenade walkway, created for the 2004 Olympics, circles the Acropolis, passing fabled remains such as the crumbling Ancient Agora of Athens complex. // Greece is a country in southeastern Europe with thousands of islands throughout the Aegean and Ionian seas. Influential in ancient times, its often called the cradle of Western civilization. Athens, its capital, retains landmarks including the 5th-century B.C. Acropolis citadel with the Parthenon temple. Greece is also known for its beaches, from the black sands of Santorini to the party resorts of Mykonos. 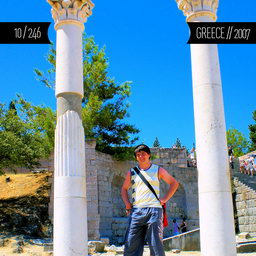